The National Gallery of Indonesia, Jakarta

The 2016 inaugural presentation of the Painting Collection of the Presidential Palace of the Republic of Indonesia, 17/71, Goresan Juang Kemerdekaan (The Brushstrokes of the Independence Struggle),  2-30 August at the National Gallery of Indonesia, Jakarta, highlighted the relevance of art and culture to the nation. Officially opened on 17th August by the current Indonesian President Joko Widodo, on the 71st anniversary of the proclamation of independence, the exhibition featured 28 paintings from the collection of over 3000 works assembled by Indonesia’s founding father President Sukarno.

It  featured scenes of the independence struggle by Indonesian maestros such as Affandi, Sudjojono and Raden Saleh alongside pictures of iconic Indonesia by painters such as Srihadi, Rudolf Bonnet and Walter Spies. The painting collection hangs in all six of the Presidential Palaces in Java and Bali. 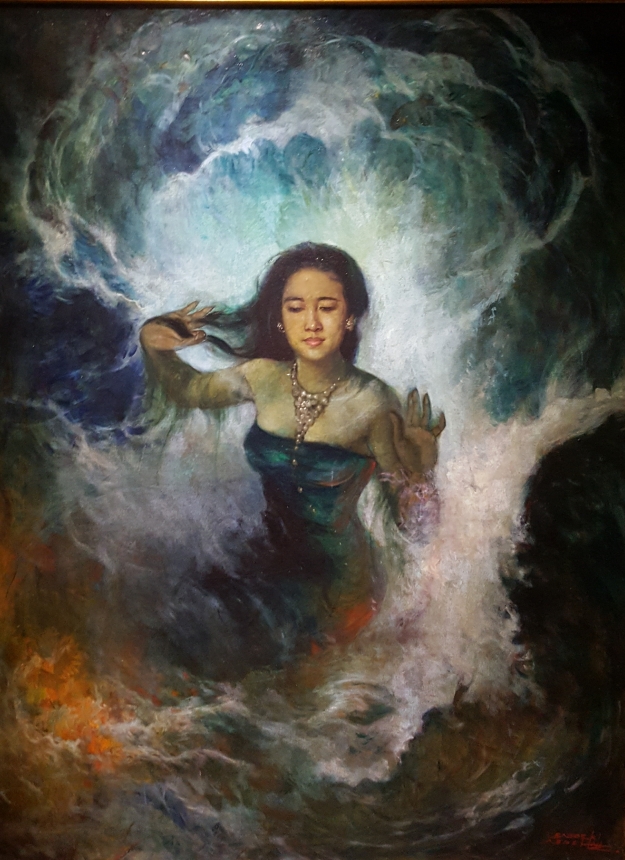 Following on from last year’s historic event which attracted over 30,000 visitors to the National Gallery, the second edition: Senandang Ibu Pertiwi (Songs of the Mother Land) open 2 -30 August as part of the 72nd anniversary celebrations of Indonesian independence. It showcased 48 works by 44  artists from the 19th and 20th centuries with a variety of themes including landscapes, tradition, mythology and religion.

The son of an aristocratic Javanese schoolteacher and his high caste Balinese wife Sukarno was born in Surabaya, East Java, in 1901. From 1921-26 he studied at the Institute of Technology in Bandung,  West Java, graduating as an engineer, focusing on architecture. As the founding father and first President of the Republic of Indonesia, a position retained for almost 21 years, Sukarno was responsible for transforming the physical landscape of the capital city of Jakarta with public art. 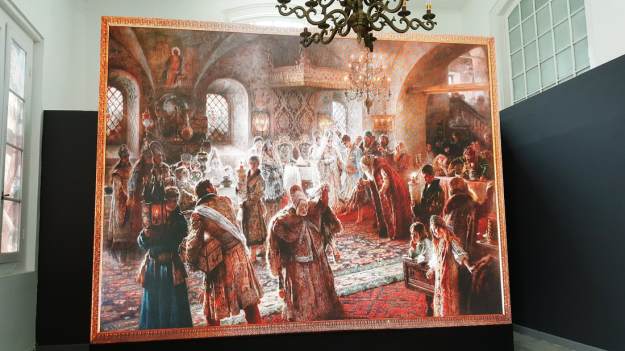 Sukarno was an art lover and a great supporter of Indonesian modern art and Balinese traditional art amassing huge collections. While he enjoyed close relationships with many  artists he was also a talented painter. During his presidencey art was seen as a tool to help build the spirit and character of the nation.

Pribite Nevesti is the first painting that greets visitors upon entry into the foyer of the National Gallery. Painted by Russian artist Egorovick Makowsky (1839-1915) it is believed to be more than 125 years old, and depicts traditional Russian wedding. The painting was given to Sukarno as a gift during his visit to Russia by the leader of the Soviet Union, Nikita Khrushchev. It was exhibited at the Kremlin in Moscow before being brought to the Bogor State Palace in West Java and put on display.

Pantai Flores (On the Shores of Flores Island) 1942 – Basoeki Abdullah

Entering the display room the first theme is Nature’s Diversity and features a  variety of  landscape paintings, twelve in number, that immortalize the dramtic and beautiful scenary of Indonesia.  One of the highlights is Pantai Flores (On the Shores of Flores Island) 1942, by Basoeki Abdullah, the painting was originally a watercolor on paper by Sukarno, that was replicated into an oil on canvas work on request by Sukarno. The scene of the beautiful Flores landscape was captured  while he was exiled on the remote Ende Island between 1934 – 38 , sentenced by the Dutch East Indies Colonial Government.

Another highlight was Harimau Minum (Drinking Tiger) 1863 by the father of Javanese modernism Raden Saleh (1811-1880) who after living in Europe for 20 years studying with various european artist, became a portrait painter for the aristracy. The painting portrays a mystical atmosphere that is rich in symbolism and depicts a tiger drinking from a river.

Works dispalyed within the theme of Nature’s Diversity 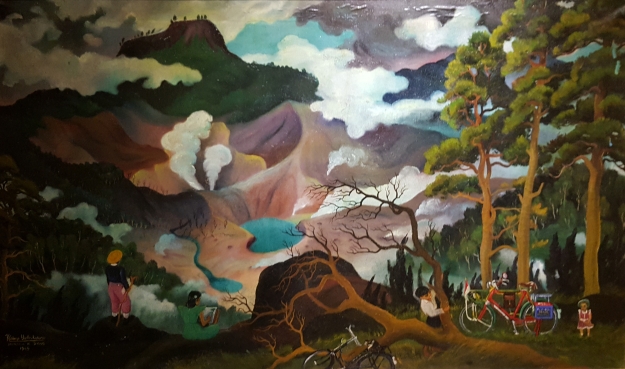 The collection of works themed Mythology and Religion offer insights into the historic and cultural influences that have evolved throughout the country over the centuries helping to define Indonesia.

According Senandang Ibu Pertiwi  curators Asikin Hasan, Amir Sidharta, Mikke Susanto and Sally Texania, the exhibtion catalogue: “The archipelago is not only a region that has numerous myths containing mystical and anthropological values, but also a locus that has created elements appropriated by almost all of the major religions in the world. The major kingdoms that prospered in Java, Sumatra, and other large islands are a melting pot for teachings whose artefacts we can still find today.”

Arguably the most iconic painting  within the mythology theme is Nyi Roro Kidul (Queen of the South Seas) 1950 by Basoeki Abdullah, a story that is often described in paintings. In Yogyakarta, there is a widely known story about Nyi Roro Kidul, who is depicted as a beautiful woman and ruler of the South Coast and seas. The myth describes that Kidul is found of the colour green, so the local people and careful not to wear this colour when they venture out into the southern ocean for fear of being taken by the Queen of the South Seas.