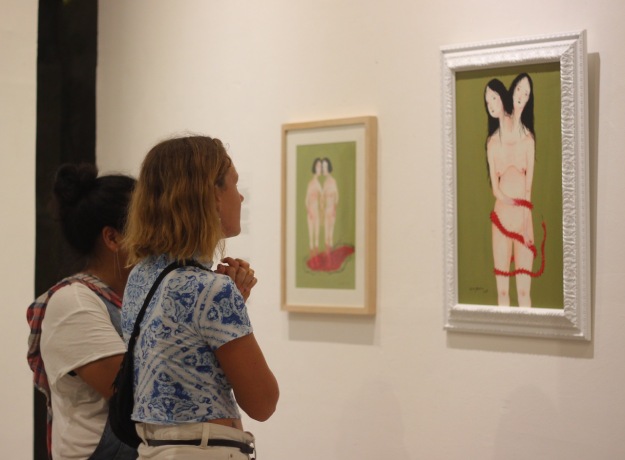 Audience members engage with paintings “Portrait of the Other, #1 & #2” by Citra Sasmita during the opening of Tanda Seru!

In 2017 a meeting of young Balinese women from various creative backgrounds, yet with similar visions, set out to create a cross-disciplinary platform to support and encourage women’s art activities and visual discourse. Their driving motivating question: ‘Why aren’t there many established women artists in Bali?’ The gathering set the foundations for a new art collective – Futuwonder.

In July 2018, Futuwonder announced its arrival on the Indonesian art scene by conducting a Wikilatih workshop (Wikipedia article writing) and uploading onto the World Wide Web eighteen new articles on female artists from Bali. Puan Empu Seni: Edit-a-thon was a part of a national drive, held in conjunction with Wikimedia Indonesia, to increase the amount of data on Indonesian female artists available on the Internet’s most go-to source of information – Wikipedia.

Leading Indonesian contemporary artist Arahmaiani with Tanda Seru! artists during the opening of the exhibition at Uma Seminyak

“Bali is a very patriarchial society with few women being represented in the art scene, especially in the museums and galleries,” said Ruth Onduko, one of the founding members of Futuwonder, along with emerging artist Citra Sasmita and graphic designer Ni Putu Sridiniari. “We intentionally invited talented young women to exhibit in Tanda Seru! especially those who make art but do not label themselves as artists,” Ruth explains. “Due to the narrow scope of today’s contemporary art world women are marginalized and few get the opportunity to exhibit their work within the fine art gallery system as their work may not follow current market trends, or may lack the necessary commercial elements.” 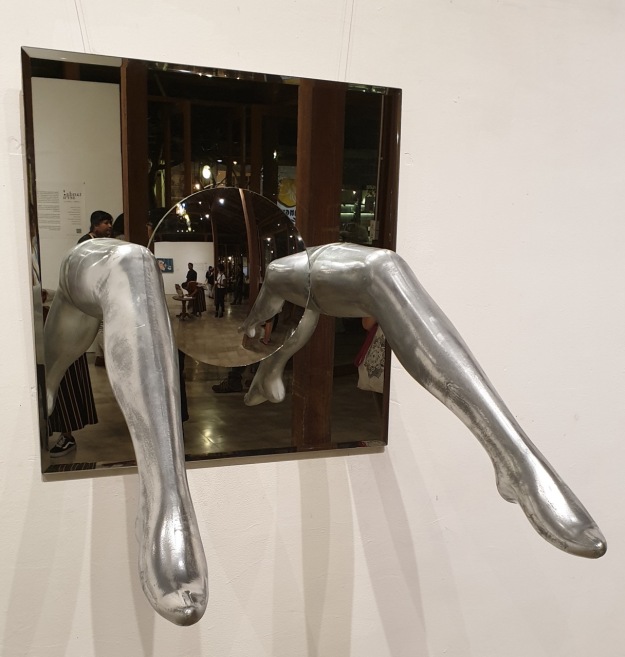 “Through Tanda Seru! we examine and question issues related to gender, patriarchy and sexuality – making statements about the female body, woman’s roles, and our capabilities as equals with men,” Ruth said. “We chose the exhibition title to emphasize the importance of these issues, while showing the art world (especially in Bali), that there is a lot of highly skilled female artists that are worthy to be considered as part of the larger art world.”

Dan Bunga Berkata (And the Flower Speaks) is inspired by Aria Gita Indira’s investigations into data released by Badan Pusat Statistik (BPS Statistics Indonesia) in 2017, that reveals 1 in 3 Indonesian women aged between 15 – 64 have experienced violence and, or sexual violence in their lives. Indira presents three small ‘still life’ compositions of flower arrangements on black backgrounds, some of the flowers, however, are embroidered in cotton. The cotton ‘patches’ are metaphors, symbolic icons for all the female victims of domestic violence. Journalists often use the names of flowers when referring to domestic violence survivors in their reports.

Crude, yet confrontational The World Between Her Legs, 2019 and Are We There Yet by Santi Permana features women’s underwear attached to brightly colored canvases. Statements to encourage strength and enthusiasm, such as: ‘forced prostitution’, ‘sexual harassment’, ‘girls are strong’ and ‘empowered women’ complete the compositions. Questioning the patriarchal reconstruction of the body of a woman who is menstruating, worshipping, in the work place, and in marriage, Happy to Bleed #1,2&3 by Cristine Mandasari presents circular compositions with restrictive statements written upon sanitary napkins. The artist poses the question, ‘With all the restrictions, can women actualize themselves as human beings who are free and equal to men?’

Communicating about the objectification of women, layers of transparent acrylic sheets frame a collage of digital images featuring mannequins, flowers and hands in the eye-catching Mannekin, 2019, by Intan Kirana Sari (b. 1999, Denpasar, Bali). Delicate brightly colored pieces of paper are arranged into collage on a blue background in Male Reproductive System, 2019 by Irene Febry. Febry imagines what the human reproductive system may look like if it was found within the body of a man.

Citra Sasmita is renowned for her descriptive paintings depicting the exploration of the female body through the suffering and pain of the wounds inflicted upon them. Portrait of the Other, #1 & #2 contrasts and balances tragedy with an unusual sense of beauty, creating strong and distinct compositions. Few Balinese artists express themselves through the medium of printmaking, Sealing the Body and Tutur Tinular by Ni Luh Pangestu Widya Sari (b. Denpasar, Bali 1991) are a departure in artistic techniques and aesthetics from the other works in the show, adding to the overall strength of Tanda Seru!

A pair of long, silver legs protrude from a square mirror, centrally positioned between the legs another mirror, round and convex. Upon inspection of Res Publica: Security Mirrors for Genitalia, by Ni Putu Sridiniari, the observer immediately comes face-to-face with their own image. The highlight of Tanda Seru! the work is both engaging and confronting, provoking thoughts, experiences and reflections upon gender identity.

“People are obsessed with private matters and sexuality. The law and the public, however, control women’s freedoms and perpetuate gender inequality,” said Sridiniari, a freelance graphic designer, who rarely publically exhibits her work. “I believe contemporary art is important to negotiate politics and socio-cultural issues – discourses that highlight personal narratives and cultural identity in a larger context: the family, community and the state.”

“I’ve always wanted to work with mirrors and body parts to create an installation, so I decided to work with legs for Res Publica, because everybody is curious about sexuality, especially in this case with the direct reference to the female genitals,” she explained. “In Res Publica, the female genitalia is a treasure, yet remains a hidden mystery, that is watched by the public eye.” 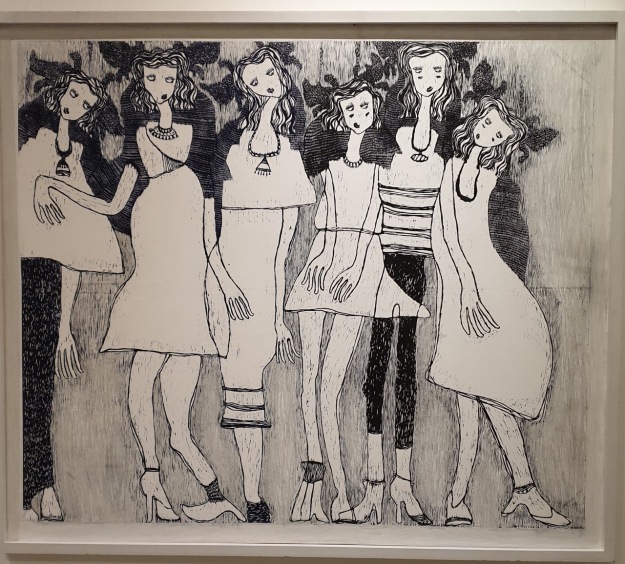