After a wait of six years Bali’s most important painter Agung Mangu Putra has followed on from Teater Rakyat (People Theater), his landmark 2010 exhibition at Galeri Nasional Indonesia, Jakarta.

Spiritual Landscapes, Mangu Putra’s 2005 solo exhibition in Gajah Gallery was an offering of gratitude to the landscape of his homeland, and his Balinese Hindu culture, paying homage via dramatic monochrome compositions that reflect his deep sense of spirituality. In Teater Rakyat (People Theater) Mangu Putra’s critical social commentary came to the fore. He focused upon the marginalized within the Balinese society, people from the economically destitute regions of Bali, female gender politics, the forgotten Independence War veterans who bravely confronted the KNIL Dutch forces between 1945-49.

In Between History and the Quotidian Mangu Putra continues his research and discovery into critical Dutch colonial events that shaped Indonesian and Balinese history. Puputan Badung 1906 (The Fall of Badung Kingdom # 1, 2 &3) 2016, 2016 & 2014 have been “pieced together” from archival accounts and images sourced from the internet into enormous compositions ranging in size up 190 x 390 cm. Telling the story of the Dutch colonial army’s confrontation with the Kingdom of Badung in Kesiman, Denpasar in 1906 that resulted in the tragic puputan event (act of ritual suicide). 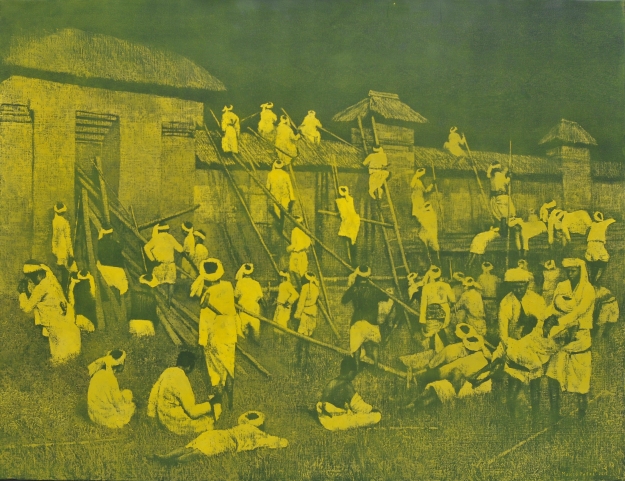 Jim Supangkat in the exhibition catalogue writes, “Mangu Putra never translates exact copies of those photographs into his works, instead he sometimes manipulates several photos and incorporates them into his paintings.”

The painting tells the story of the Dutch colonial army’s confrontation with the Kingdom of Badung in Kesiman, Denpasar in 1906, that resulted in the tragic puputan event (act of ritual suicide) when the Balinese rulers chose to fight to the death rather than surrender.

The Fall of Badung Kingdom # 2, 2016 reveals senior officials of the Dutch army seated behind the body of the Raja of Badung, I Gusti Ngurah Made Agung, in a post puputan pose, a reconstruction of possible events. Mangu Putra positions the Raja’s throne next to his prostrate body as a symbolic gesture. 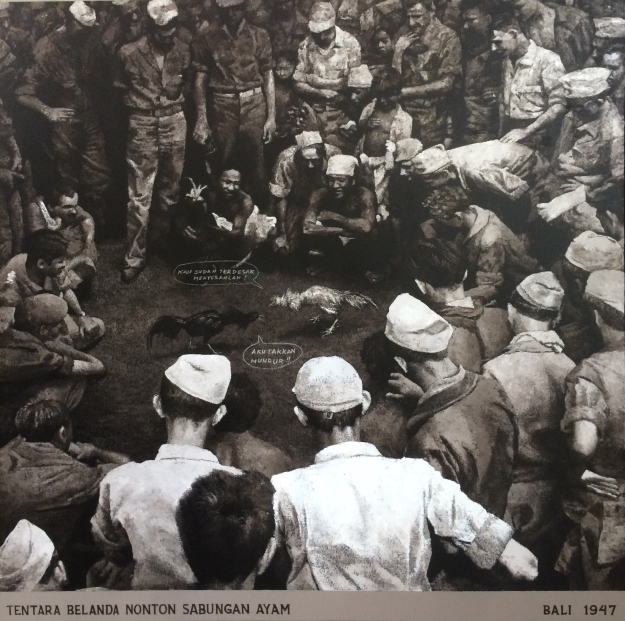 “Mangu Putra does not reproduce reality as with other realistic paintings, but paints his account of the light’s reflection,” said Supangkat of Mangu Putra’s technique.

“The resulting image is a textured realistic painting, with apparent contrasting effects caused by the beam of light on the painted surface. The aesthetic qualities present in his works – lines, textures, contrast effects – as a result permeate a narrative filled story on his canvases.” 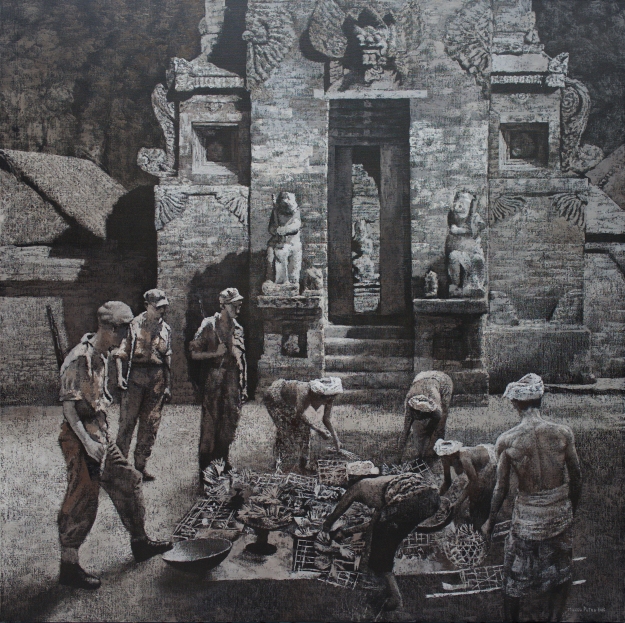 “Mangu Putra, like many of Bali’s modern and contemporary artists, was trained in Yogyakarta at Indonesia’s premier art school, ISI, the Institute Seni Indonesia,” states Professor of Southeast Asian History Adrian Vickers in the exhibition catalogue.

“Unlike many others who emerged through painting, Mangu Putra was trained in graphic arts and design, and his original career was in advertising. The sensibilities he developed in presenting the mundane to the world meant that he is attuned to the effect power of images. He turned to problems of how such images should be made to work in the world in a more critical fashion.”

In Eksekusi Letda Reta (Execution of Letda Reta), 2014, Mangu Putra depicts the execution of his uncle I Gusti Agung Alit Reta, who along with his father both fought in the Independence War, Alit Reta being captured and later executed by the Dutch. In the painting he appropriates the style of Francisco Goya’s The Third of May (1814) – which depicts a death sentence served on a rebel farmer by a Spanish firing squad. Here Mangu Putra imagines the moment of his uncle’s execution as one of defiance.

Adu Jago (Cock Fight) 2016 reveals a scene where Dutch troops and Balinese are watching a cock-fight. One roaster yells to the other: “Are you ready to surrender?” The other responds: “I am not going to retreat.” According to Supangkat the universal message in this painting, along with Eksekusi Letda Reta is that the concept of authority is a threat that has never subsided, though the power behind that authority may always change.

In Transit? 2016 Mangu Putra reveals an extremely interesting, yet little known story within the history of the Dutch East Indies of a Germany aircraft, with swastika emblems, that flew from Brandenberg, Germany to Medan, Sumatra, Batavia, Surabaya and landed in Buleleng, Bali 7 January 1938.

“Photographs contain layers of narratives, and within these there are always hidden meanings that I am driven to delve into,” said Mangu Putra.

“Mangu Putra is not a historian, yet his intuition is sharp in detecting these milestones in history. He feels that these phenomenal milestones are substantial to further the research on the connection between Indonesian and world history, writes Supangkat in summing up his essay titled “Identity Politics” in the exhibition catalogue, and later continues,

“Indonesian history still requires the pursuit of historical examination, so that history doesn’t become a myth of the present,”

Both Mangu Putra’s investigation along with Jim Supangkat’s accompanying essay are important documentations of a crucial era of the nation’s history and collectively combine into one of the most important Indonesian contemporary art exhibitions in recent history.

Mangu Putra: Between History and the Quotidian