Balinese traditional art is the art of story telling. Its ancient narratives bring to life tales from the sacred Hindu and Buddhist texts, old Balinese and Javanese folklore, and accounts of daily life. Its purpose is to promote harmony within the community via examples of proper moral conduct.

During the past century indigenous art has been revolutionized via the meeting with Western art techniques and ideas into a ‘new’ genre that became known as Balinese modern traditional art. This art form thrived due to the development of new tourist markets, driven initially by the first wave of foreign visitors in the 1930’s, who after holidaying on Bali wished to purchase a memento to bring home. A distinctive feature of Balinese modern traditional art is the different village styles, or ‘schools’ that evolved over time, each with its own individual creative verve. 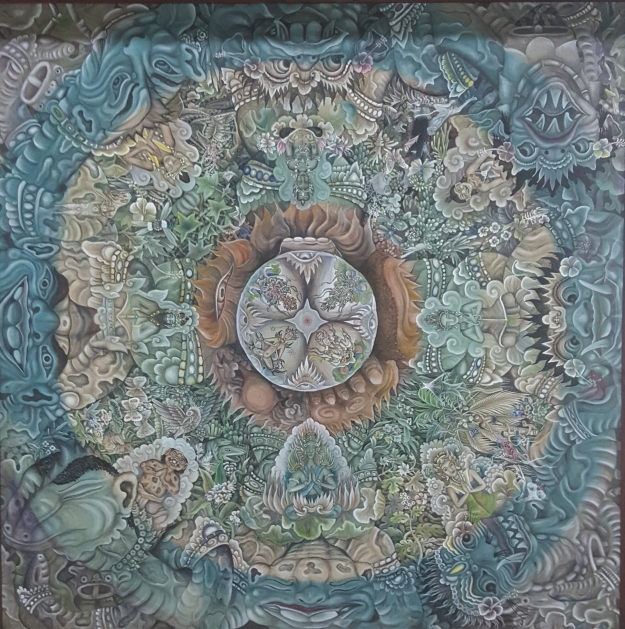 Stories from the other side of the canvas – both triumphant and tragic – of the artists and the events behind the art have enriched the ‘aura’ of Balinese modern traditional art while endearing a global audience. This is a tale about the art and some of the characters that have distinguished the art from the village of Pengosekan.

Overshadowed by the more famous styles of Ubud, Batuan and Sanur, Pengosekan, one kilometre south of Ubud, has its own art history, complete with unique figures, and signature styles. The most celebrated of all Pengosekan painters is Gusti Ketut Kobot (1917-1999), accredited as one of the leaders of the post-war changes in Balinese paintings, he was also an influential art teacher. Some of Kobot’s finest works are mythological featuring characters from the religious narratives, while he also responsible for creating the prototypes for the scenes of village life that would be ceaselessly imitated for mass production as tourist art.

Kobot’s renditions of characters that still today are brought to life in the Wayang Kulit shadow puppet theatre are executed with extraordinary attention to compositional balance. According to the Balinese paintings that achieve perfect visual equilibrium indicate the artist’s excellent skills, and his strong connection with the divine. Brahma on Wilmana, Kobot’s painting of the Hindu god of creation riding the monster headed mythical bird Wilmana, on permanent display at the Neka Art Museum in Sanggingan, Ubud is fine example of his talent.

Structured with outer layers of decorative patterns the central characters appear framed and effortlessly poised, Wilmana wears a magic protective poleng (black and white checkered cloth) around the waist to avert harmful forces, since it has positive white and negative black in balance. Kobot is renowned for such depictions, honing them to the height of refinement. He is acknowledged as one of the masters of the original Ubud artist’s cooperative, the Pita Maha that thrived between 1936-1945, helping establish Balinese modern traditional art.

The inhabitants of Pengosekan were predominantly farmers, tending the agricultural fields surrounding their village. In the process of breaking away from the orthodox subject matter that featured in their paintings, the artists began to look outside of the conventions for new creative inspiration, and started paying more attention to nature.

A signature style developed in Pengosekan during the 1960’s featuring images of local flora and fauna painted in fresh pastel colours. At first the artists focussed on depicting bird life set within beautiful scenarios of forests and trees, others then explored nature close-up, their compositions highlighting an array of insects, often grasshoppers or butterflies rendered in great detail. 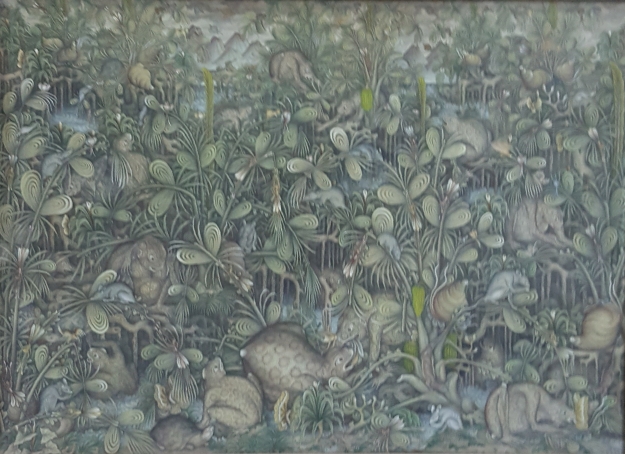 One of the finest practitioners of the flora and fauna style is Ketut Rudi who was born in Lotonduh, just south of Pengosekan in 1943. His works were commissioned and collected by the second President of Indonesia, Suharto (1921-2008) and hang in the Presidential State Palaces around the country. Rudi often painted at the State Palace in Tampaksiring, Central Bali, while Suharto was on retreat from the nation’s capital city, Jakarta. To ease his mind Suharto would often sit for hours watching Rudi at work.

Another painter, Ketut Liyer (1924-2016) was a local village priest (pemangku) who painted agricultural scenes and the sacred cloth amulets known as rerajahan. Liyer, who was also a paranormal and ‘healer’, shot to international fame via the Hollywood movie Eat, Pray, Love released in 2010 and starring Julia Roberts. Liyer’s paintings occasionally come up for auction at the twice-yearly Larasati Bali art sales held in Ubud.

Dewa Nyoman Batuan (1939-2013) was an icon within the world of Balinese art. Painter, entrepreneur and artist community visionary, he was graced with an effervescent personality. Batuan had a dream for his village that manifested into the Pengosekan Community of Artists in 1970.  Through his entrepreneurial endeavor he helped establish international markets for the local paintings and was able to contribute enormously for the well-being of the community of poor farmers, many who became painters to supplement their family income. Batuan’s contribution to the development of Balinese modern traditional art was to fuse traditional narratives within the Buddhist structural icon of the mandala, designing compelling, unique, and highly original works.

His older brother, Dewa Putu Mokoh (1934-2010) broke free from the restraints of Balinese art to introduce personal and intimate visual stories of another side of life that was often quirky, lurid, and even taboo. Simplified forms dominated his compositions, a self trained artist, Mokoh’s works boarded on both the modern and contemporary, simplifying and extending the range of images in Balinese art, especially with his close-up focus on intimate scenes.

Pengosekan became the adopted home for the most important woman artist in Indonesian art history, Gusti Ayu Kadek Murniasih (1966-2006). Murni came from Tabanan, Central Bali to study with Mokoh. She rose from the life as a child of a farmer, poor and uneducated to the ranks of artistic distinction. Her father sexually abused her at the age of nine. Murni’s minimalist figurative/surrealistic style featured powerful coloration while communicating via the language of the sub conscious. Her outsider art is confrontational, daring and even violent, yet always electrifying. Murni’s work broke significant grounds into the social taboos of gender politics and feminism.