Last in line in the chronology of genres of modern traditional painting, coming after the mid 1960’s Young Artist’s Style, the Keliki paintings depict on paper the plethora of Balinese imagery in the tiniest of frameworks. The art of creating miniature images, however, has a long history, having been passed down over generations and dating back as far as the 9th century. 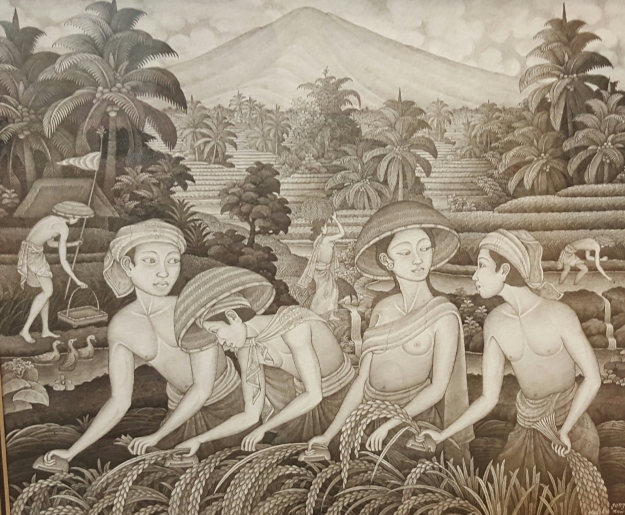 Derived from the decorated manuscripts, processed on dried leaves and known as the lontars, the information is contained on pages measuring 30cm wide by 5cm high. Still in use today, the books reveal knowledge as diverse as holy scriptures, prominent rituals, family lineages, laws, medicine, arts, architecture, calendars, literature, and even the rules for cock-fighting. A sharp writing instrument is used to score the small text and drawings.

The Keliki School of Miniature Painting began in the early 1970’s in the Keliki Kawan village, 20 minutes north of Ubud. The village nowadays is home to more than 300 artists, in a tradition where the master pupil relationship, often father and son/s, plays an essential role. Two artists, I Ketut Sana (b.1952) and I Made Astawa (b.1953) are responsible for the development of this style that over time evolved to encompass a community of artists, and helping to supplement the incomes of poor farmers through the sale of works. 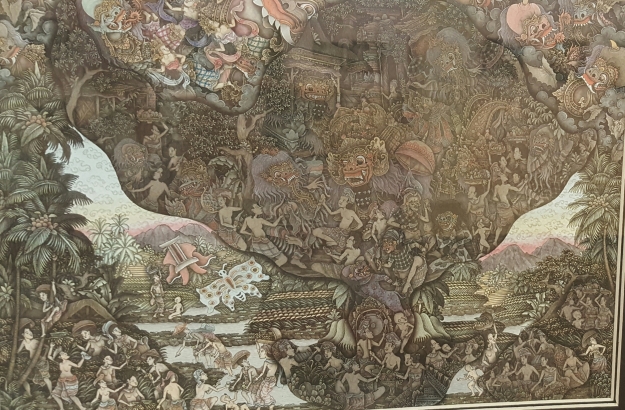 Both Sana and Astawa were students of the grandson of Bali’s most important modern artist and architect, Gusti Nyoman Lempad (c1865-1978), while also learning from masters of another respected genre, the Batuan School. Inspired by Lempad’s line techniques and the crowded Batuan ‘signature’ style, they reduced their compositions down in size, and the Keliki miniature style was born.

In 2011 the Werdi Jana Kerti Artists Association of the Keliki Kawan village was formed in an effort to maintain and preserve the genre. Since 2013 they have exhibited annually at Museum Puri Lukisan, the exhibition being a highlight on the Ubud art calendar. The collective currently has 75 members, of which 58 participate in the current show, aged from 14-70 years, including 11 women, while 23 of the artists are under 30 years.

Panen, 2016, by Gusti Putu Lasyantika is a fine example of the miniature style. His painting fuses two compositions into one. The outer image, set on a black background, is of colorful native birds peering in on the inner scenario, while contrasting with, and framing it. The inner focal landscape, constructed in receding layers to emphasize depth of field, shows farmers harvesting rice fields. In the distance Bali’s iconic volcanic landscape is visible with the sun’s soft golden rays illuminating the afternoon sky. What’s remarkable about Lasyantika’s painting, which involved hours of painstaking attention to detail, is that all of this imagery is captured within the reduced dimensions of only 12 x 12 centimeters!

During the past decade the onslaught of modernization that has become incompatible with traditional norms, has become a popular theme among traditional painters. Deforestation and relentless urban development are depicted in Illegal Logging, 2016 by Putu Kusuma. In the foreground heavy machinery and men with chain saws destroy the landscape. In the background the city’s high-rise skyline encroaches. The focal point is the sacred Balinese tree as the foundation of the natural eco system – the tree of life.

Gusti Putu Sudarma’s Bandara Harapan, 2016, 38 x 27 cm, acrylic on paper, is also aligned with the fore mentioned theme, yet his imagery is mostly unconventional. In a scene reminiscent of Dutchman Hieronymus Bosch (c.1450 -1516), in his style that was the forerunner to the 1920’s surrealism movement, the artist depicts a composition of two opposing worlds.

The foreground is filled with colorful circus characters, both real and imagined, with an array of unusual objects, some small, while others are monumental. Various other abstract structures and forms, along with figures appearing as observers, make up the relevant visual information. A few, seemingly insignificant, traditional parasols are the only recognizable Balinese icons.

Rendered faintly in the distance is the Bali of yesteryear, in a lush mountainous landscape dotted with Hindu temples. In top the right side a sits a small figure raised upon a pillar in meditation, while in the top left corner two brown figures appear, one holds a flag in an apparent gesture of surrender, the other in apparent raptures of grief.

This is a fascinating and clever composition worthy of focused attention. Do Sudarma’s metaphoric symbols represent his idea of a dystopian Bali?