“Our intention was simple when we began promoting traditional Balinese art 10 years ago,” says CEO of Larasati Auctioneers Daniel Komala. “We wanted to revive the “dying” market.”

During the past decade, with two auctions per year in Ubud Larasati have opened up an international forum for the trade of high quality traditional Balinese works, especially paintings. “By introducing professionalism of an international standard that Bali had yet to experience in its art dealings Larasati has helped create a real, healthy market for traditional Balinese art.”

One of the many highlights of the February 28 auction is Lot #40 “Tari Joged Bumbung”, 2008, acrylic on canvas by A.A. Gede Anom Sukawati (1966 Ubud). Anom Sukawati is an artist from a great lineage with unique talent in constructing compositions, matched with excellent colorist skills. His attention to detail upon the costumes of dancers, accentuating movement, his choice of, and positioning of color creating powerful contrasts, are his trademarks. This is a captivating, highly calculated work pulsating with visual rhythm.   Priced between Rp. 80,000,000 – 120,000,000 is a low estimate.

Ida Bagus Made Poleng (1915-1999 Tebesaya), a master from the influential 1936 Pita Maha Artists collective, is arguably the most talented Balinese painter of the 20th century. Lot #80 “Legong Dance”, estimated at Rp.850,000,000 features on the rear cover of the 2008 Musuem Puri Lukisan 50th anniversary catalogue “Ida Bagus Made – The Art of Devotion”. A “rounded” composition of exceptional quality with good, balanced coloration, such works are rarely available on the market.

Lot # 79,“The Witch and the Servant”, an ink sketch on paper by Bali’s greatest modern artists, Gusti Nyoman Lempad (1862-1978) is priced at a low estimate of Rp. 130,000,000 – 170,000,000. The sketch is beautifully framed two demons in the bottom corners observing and functioning as commentators, while the trees at the top complete the framework to surround the central characters and perfectly balance the composition.

“The Witch and the Servant” –  Gusti Nyoman Lempad

The finest woodcarver from the village of Mas, Ida Bagus Nyana (1912-1985) was the first to depart from the popular elongated figurative style and created works characterized by their plump mass. Most of these feature figures squatting or sitting, however Lot # 77, “Blissfully Sleeping” is a fluid reclining figure with legs that disappear downwards. Rich in warm brown tones this excellent and rare find has an estimated price between Rp. 270,000,000 – 350,000,000.

Soft blue grey tones with highlights of white are the trademark colours of the “Pengosekan Style” and are beautifully featured in Lot #78 Triwikrama” by Gusti Ketut Kobot (1917-1999 Pengosekan), another master of the PitaMaha. At a low estimate price between Rp. 70,000,000 – 100,000,000, if purchased between this estimate represents excellent buying.

Another fine work with a low estimate price of between Rp. 38,000,000 – 48,000,000, is Lot #38 “Arja Dance” by Wayan Sudana (1966 Peliatan). This is a beautiful and daring composition featuring the lead dancer as the focus of attention of the 4 other dancers. The foreground and the background of the painting, however seem to reflect two differing worlds causing a sense of disconnection and disruption of visual rhythms. Dark and moody, yet incredibly detailed Lot #39 “Pementasan Calon Arang” an early work by Ida Bagus Putu Sena (b.1966 Ubud), however is estimated high at Rp. 150,000,000 – 200,000,000.

“Boy With Bamboo Stick”  –  Made Sukada

“We believe that our 10th anniversary collection is the best to date to be offered in the market,” says Daniel, who considers promoting art as a never-ending marathon. “Today I’m proud to say that in our ten years Larasati has achieved well beyond our expectations.”

Art experts perceive that the Balinese Modern Traditional paintings present good value buying opportunities and are considered undervalued. A 10 year future projection of current prices would confirm that purchasing now is a sound investment. This auction is sure to attract the attention of local and international collectors, investors and novices alike with many highly regarded artists, a wonderful array of attractive works in different mediums and sizes, catering to various tastes within attractive price ranges available. It’s a buyers market.

Buyers bidding over the phone who are unable to attend the previews days or auction are advised to contact Larasati and inquire about the color reproduction accuracy of the images contained within the online catalogue to ensure that what they wish to purchase can be realistically gaged. Condition reports of the works, outlining the paintings current state and whether it has repairs or over painting are available upon request. Provenance, the historical data of the works previous owner/s is also important. 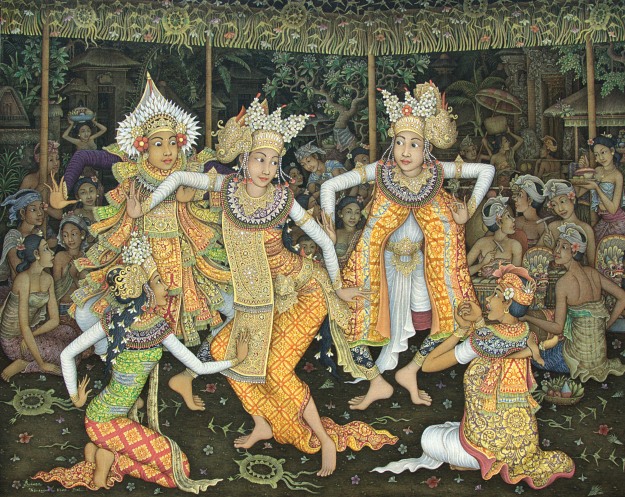